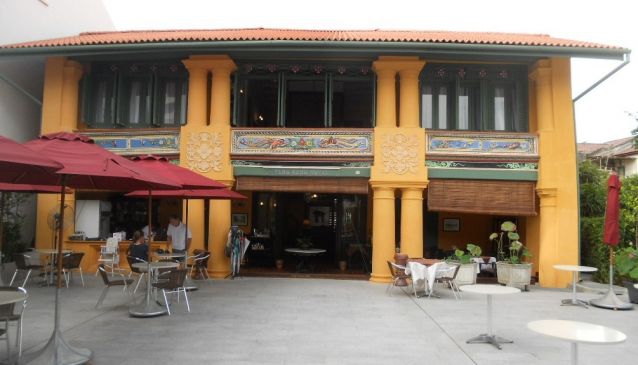 Yeng Keng Hotel is a 20-room restored heritage boutique hotel located in one of the oldest surviving and intact 19th century buildings at the heart of the UNESCO World Heritage City of George Town, Penang.Like many of the other buildings in the neighbourhood, it was originally built in the mid 1800's as a private residence. The Anglo Indian bungalow belonged initially to Shaik Eusoffe bin Shaik Latiff an Indian Muslim family and remains unique in Chulia Street for not being relegated to the rear of a row of shop-houses blocking its facade. In 1897 trustees of the Cantonese Club 'Ying Han Pit Shu' bought the building on behalf of the association, later donating it to the trustees of the Straits Chinese Building Association in 1939. The building was later leased to Yeng Keng Hotel.The conversion from a residence into a budget hotel was the prevailing trend along the street, at the beginning of the 20th century. Small places of lodgings that were conveniently reached from the harbour were in great demand as the traffic in the port grew. An impressive traditional Chinese entrance gate was constructed announcing entry to the 'Lodging House', adding grandeur to the commercial establishment and to distinguish it from the rest of the buildings on the street.Conservation and upgrading by the present owner, Hoo Kim Properties Sdn Bhd was undertaken in March 2009 with the renewed Yeng Keng Hotel completed in April 2010.